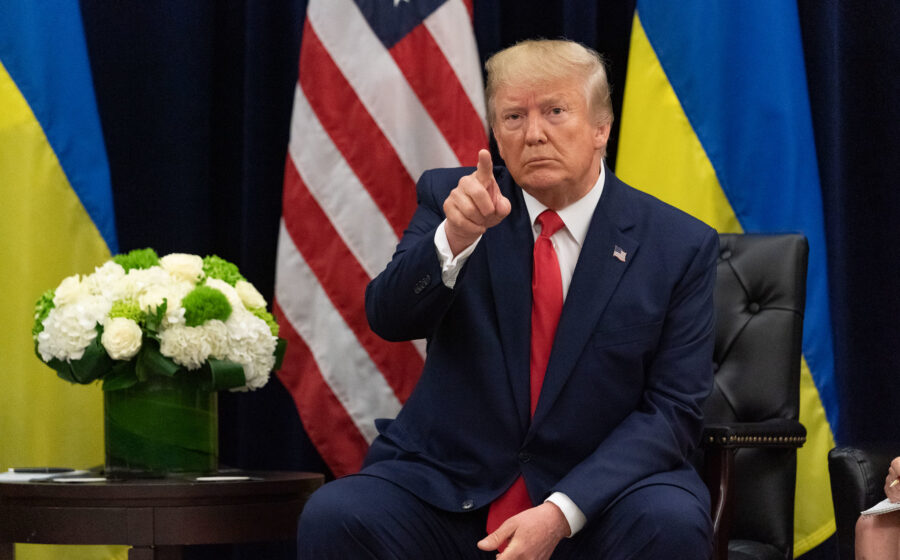 Former President Donald Trump issued a warning that the stockpile of US weapons left behind following the troop withdrawal in Afghanistan and seized by the Taliban will likely end up in Russia and China.

“It’s the most incompetently handled withdrawal in history,” said Trump, in an interview with “Full Measure.”

“There’s never been anything like this, where we gave them $85 billion worth of brand new, beautiful equipment,” the former president said of the weapons. “And I guarantee that China and Russia already have our Apache helicopters, and they’re taking them apart to find out exactly how they’re made.”

“They’re taking them apart so they can make the exact same equipment,” Trump said. “They’re very good at that. It’s a disgrace.”

Trump explained what he would have done differently in the withdrawal process.

The former commander-in-chief said the hectic evacuation likely helped terrorists get into the US.

“You have people going all over the world and being dropped all over the world right now, and nobody knows who the hell they are,” Trump said. “Many of these people are going to be terrorists. They were very energetic getting onto the aircraft.”

Trump warns Taliban-seized US weapons will be given to China, Russia

Defense secretary: the world was ‘hopeful’ the Taliban would be ‘inclusive’

Defense Secretary Lloyd Austin said that the world was optimistic that the Taliban would form an “inclusive” government, but there isn’t any indication they’re going to follow through.

The Taliban previously claimed that they would aim to have an “open, inclusive Islamic government.”

“You know, I think the whole international community was hopeful that they would be inclusive as they kind of said they would be weeks and months ago, but we’ve not seen evidence of that early on,” Austin said.

The Taliban recently announced its new government members, which consist entirely of men. Sirajuddin Haqqani, the new acting interior minister, carries a $10 million bounty from the FBI. The Associated Press reported the belief is that Haqqani is holding at least one American hostage.

Austin: No evidence Taliban being ‘inclusive,’ says ‘I don’t look favorably’ on wanted terrorist in government

Secretary Blinken admits that the Taliban are blocking evacuation flights

Secretary of State Antony Blinken acknowledged that the Taliban are preventing evacuation flights out of Afghanistan— an apparent contradiction from his comments a day before where he denied that the extremist group was holding Americans hostage.

“As of now, the Taliban are not permitting the charter flights to depart. They claim that some of the passengers do not have the required documentation,” Blinken said Wednesday. “While there are limits to what we can do without personnel on the ground, without an airport with normal security procedures in place, we are working to do everything in our power to support those flights and to get them off the ground.”

The White House came under fire for not doing more to pressure the Taliban to allow flights to depart amid reports that six planes were sitting on the tarmac at the Mazar-i-Sharif airport.

“We are not aware of anyone being held on an aircraft or any hostage life situation in Mazar-i-Sharif,” Blinken had said Tuesday. Graham says the US will ‘have to’ reinvade Afghanistan

Less than a week after the US finalized its troop withdrawal, Sen. Lindsey Graham (R-SC) told the BBC that America “will be going back to Afghanistan” to deal with terrorist threats.

Graham said the Taliban is “going to give safe haven to al Qaeda, who has ambitions to drive us out of the Mideast writ large and attack us because of our way of life. We will be going back into Afghanistan as we went back into Iraq and Syria.”

“We’ll have to,” Graham said. “We’ll have to because the threat will be so large. It will be a cauldron for radical Islamic behavior.”

Recent polls indicate a lack of public support for sending troops back to Afghanistan.

A Pew Research Center survey showed 54 percent of Americans supported the decision to withdraw. The same study found that 69 percent thought the US failed to achieve its goals in the war-torn nation.

Graham says US ‘will be going back’ to Afghanistan

President Joe Biden addressed the nation on Tuesday, calling the withdrawal of troops from Afghanistan an “extraordinary success,” despite the ISIS-led deaths of service members and hundreds of American citizens being left behind.

“As we close 20 years of war and strife and pain and sacrifice, it’s time to look to the future, not the past,” Biden said at the end of his speech, which had been delayed nearly two hours.

“The bottom line, 90 percent of Americans in Afghanistan who wanted to leave were able to leave,” Biden said.

Republicans say Biden abandoned US citizens after he vowed last week not to leave any American behind.

“Joe Biden promised American citizens in Afghanistan that he would stay until he got them out. When the rubber hit the road, Joe Biden kept his promise with the Taliban, and he broke his promise to Americans,” Sen. Tom Cotton (R-Ark.) said.

US officials, Taliban met to negotiate the takeover of Kabul

The Taliban offered the city of Kabul to the US before its collapse, a senior US official confirmed to the Washington Post.

“He not only abandoned his country, but then unraveled the security situation in Kabul,” the senior US official said.

It didn’t take long for law and order to disintegrate, or for armed gangs to roam the streets. In a hastily arranged in-person meeting, senior US military leaders in Doha spoke with Abdul Ghani Baradar, the Taliban’s political leader.

“We have a problem. We have two options to deal with it: You [the United States military] take responsibility for securing Kabul, or you have to allow us to do it,” Baradar said, according to the US official.

President Joe Biden stuck to his resolve to continue the withdrawal of US troops, opting for the Taliban to take over the city.

“We didn’t see a single soldier or police,” Taliban commander Muhammad Nasir Haqqani said. “We couldn’t control our emotions. We were so happy. Most of our fighters were crying. We never thought we would take Kabul so quickly.”